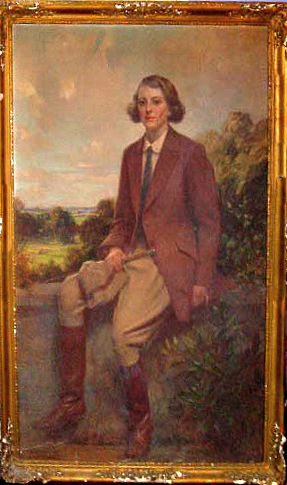 In the early 2000s I visited my mother with my daughter and asked to see her large portrait, painted by Nottingham artist Arthur Spooner, whose painting of Goose Fair I mention in the last blogpost. This portrait, blotchy with damp, over five feet high and with rather a daunting gaze, was stored in my mother’s garage, along with a stuffed fish and an old Mini amongst other things.  She loathed the painting, which had hung over the stairwell at my grandmother’s house near Nottingham Castle.  After her death, one of my brothers took the portrait home with him.  After a particularly acrimonious quarrel, his first wife slashed it.  I think my mother probably wouldn’t have cared that much, but I’m glad I took this photo before it was destroyed.  I’m not sure how much my mother rode, but know she was actively anti hunting when she lived in Devon.  The large rockery at her home in Nottingham’s Park was, to her neighbours’ chagrin, an estate of extremely tame foxes, which later in her life she referred to as her ‘wolves’, sleek and healthy on a diet of Pedigree Chum.