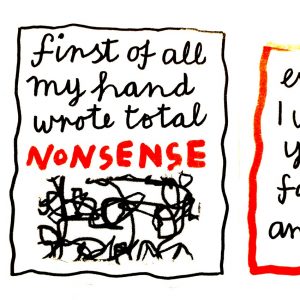 This is from STRANGER, my ongoing comic strip mystery memoir, a work in progress.  The frame above refers to the difficulty of writing a letter when told many times in the past that doing so would have dire consequences.  The physical act of writing this letter was extremely problematic, taking several hours, as my hand seemed to be behaving oddly, the opposite of so-called automatic writing perhaps.  Eventually I wrote and posted the letter, which to my surprise was answered, and was the start of a ten year correspondence, which led to more questions than it answered. 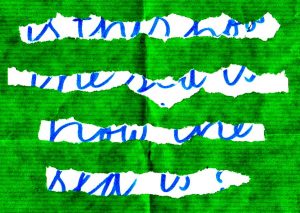 This reminded me of an incident years ago at a French class, when I was disconcerted by the actions of D, an elderly man sitting next to me.  Although his right hand was taking notes about French vocabulary, his left seemed to have a life of its own, and raced across a page of notepaper.  I asked him about this. ‘Oh,’ he sighed, ‘it’s Marie Antoinette with a message, so inconvenient sometimes.’  I learned that D lived in a North London flat which he’d attempted – not altogether successfully – to turn into a mini version of Versailles.  I don’t know what Marie Antoinette wrote to him, feeling it impertinent to ask at the time.