Last saturday I visited Southwark Cathedral’s small but fascinating Larking exhibition, a display of mudlarking treasures found (mostly) on the Thames foreshore.  Isn’t larking a happy-making word? Implying joyous activity I think. The little porcelain or bisque figures above are called Frozen Charlottes, referencing a Victorian poem about a child who died from hypothermia.  Apparently the tiny figures were sometimes baked inside a cake or pudding as a surprise, dental or otherwise. 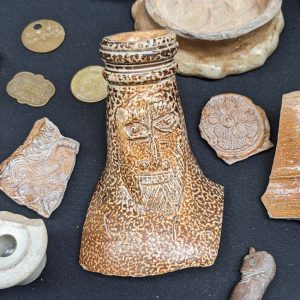 This salt-glazed stoneware fragment of a Bartmann  or Bellarmine bottle shows a bearded man, who rather resembled my late husband.  Some years ago I found a similar piece on the Thames foreshore, I think on the beach below the Tower of London, when it was open to the public one day a year in the summer. Later I propped up the fragment against a flowerpot in my tiny garden, but it seems to have disappeared, maybe to surface at some point in the future and puzzle the finder. 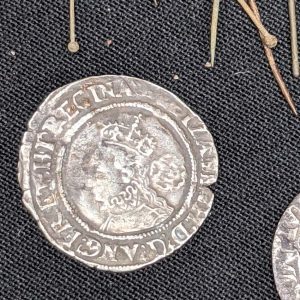 Another treasure, showing an image of Queen Elizabeth I, lay amongst coins and pins on a table in front of curator, mudlark and Thames archaeologist Mike Webber, who encouraged visitors to handle the objects, and was a delight to talk to. 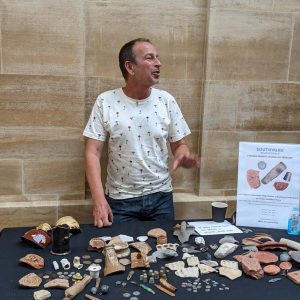 Very strange to pick up an ancient flint hand axe, or pop on a Victorian thimble.  Disappointingly, I wasn’t momentarily transported back in time, as my mother claimed she was occasionally. 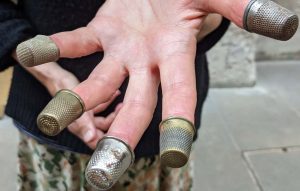