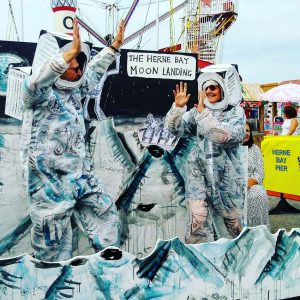 At last I got my timing right and managed to catch Herne Bay Cartoon Festival  and chat to some of the many cartoonists doing their stuff on the pier, and enjoyed putting faces to names. Good to see Martin Rowson again, this time painting a bottom – its cheeks eventually transformed into the faces of Trump and Johnson. 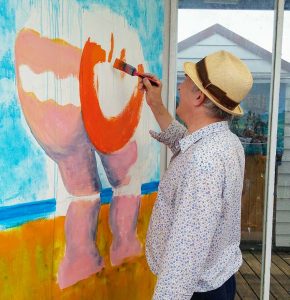 Great to catch Glenn Marshall’s moon landing, complete with dry ice (it drifted away), the soundtrack of 2001, dancing and the Clangers – what fun! Then an ice cream at Makcaris (established 1931).  They specialise in unusual flavours such as, erm, Marmite or Mushy Peas, but even one scoop of their plain chocolate was a bit too much for me. 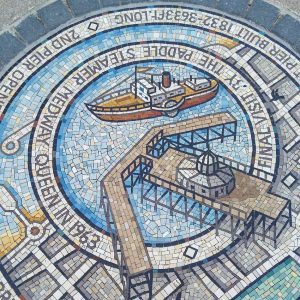 I wandered up to the wonderful mosaics by Rob Turner near the Clock Tower, past the statue of inspirational aviator Amy Johnson, visited the town’s excellent Seaside Museum and nipped into the Divers Arms, intrigued by its history and painted pub signs, some of which were in a little courtyard round the back. Its motto translates into ‘while I breathe, I hope’ by the way. 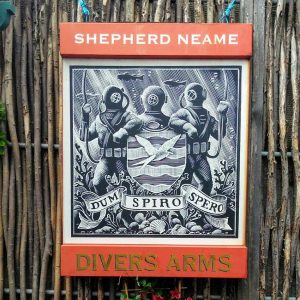 The original pub was opened in the 1830s by former smuggler William Wood, who’d been transported to Australia.  On his return to Kent he worked as a diver for a salvage company. It’s said that he paid for the pub with money he’d made salvaging treasure from a Spanish galleon shipwrecked off the Irish coast. The Divers Arms is now a live music venue, and is apparently haunted by a man in a bowler hat – shouldn’t that be a diving helmet?