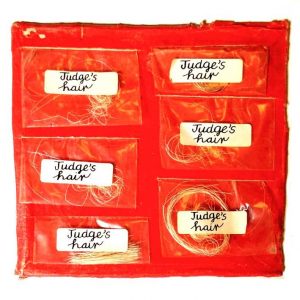 This piece was the result of some research for a book all about hair I wrote and illustrated for Walker Books some years ago. Fascinated by the subject, I probably did far too much research, but enjoyed every minute of it.  As well as going to an event at London’s Moustache Club, investigating baldness cures etc., I spent a morning drawing and chatting with a group of women who make legal wigs, in a rather Dickensian London basement. 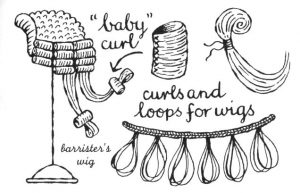 Mothers and grandmothers of some of the women had been wig-makers too.  “Would you like to see something special?” I was asked.  They showed me a battered tin with a square of black silk inside it.  This would have been placed on top of a judge’s wig when sentencing someone to death for committing murder.  It hadn’t been used since 1964, when the last person was hanged. 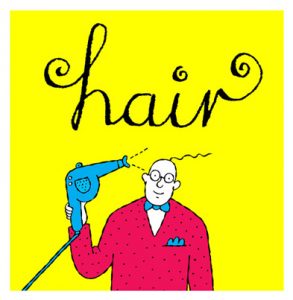 I started being interested in hairstyles when I was a child – I hated having my hair brushed and combed.  As I warning, my grandmother – I was living with her at the time – showed me a picture of Struwwelpeter as a warning of how I’d end up, but I was inspired by his wild locks.  My hair is a bit calmer now, though I do have a blue streak in it. 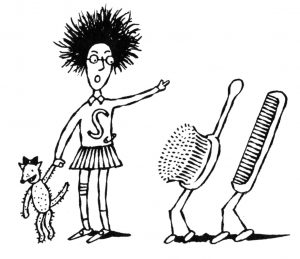 Do you have a fantasy hairstyle?  On June 16th I’ll be running a workshop at The Library Space where you can draw yours, inspired by the most excellent exhibition Hair! Human Stories. And by my book of course.