What an amazing weekend at the Lakes International Comic Art Festival!  Fantastic comic makers, films, live drawing events, talks and unexpected meetings.  Spent saturday afternoon encouraging families to hatch dinosaur eggs (as you do) at my workshops in Kendal’s Westmoreland Shopping Centre.  Outside Poundland.  I had a plan to include drawing comic strip stories about the discovery of the mysterious Windermere Tizzie Whizzie (see later on in this post) hence my inspirational ears, but dinos won out. 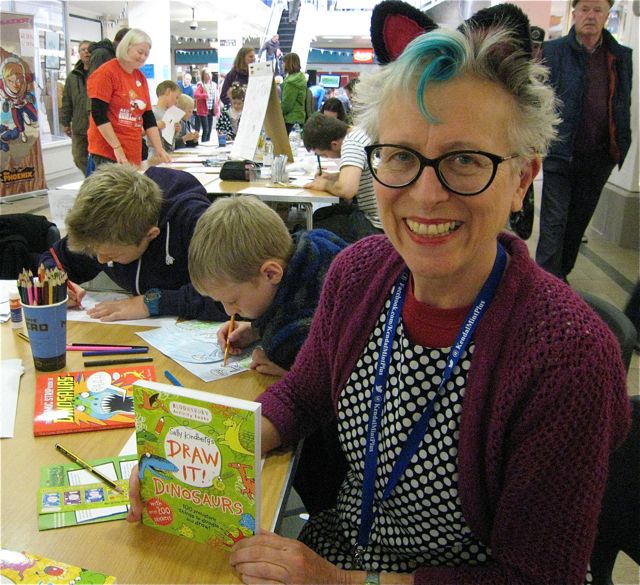 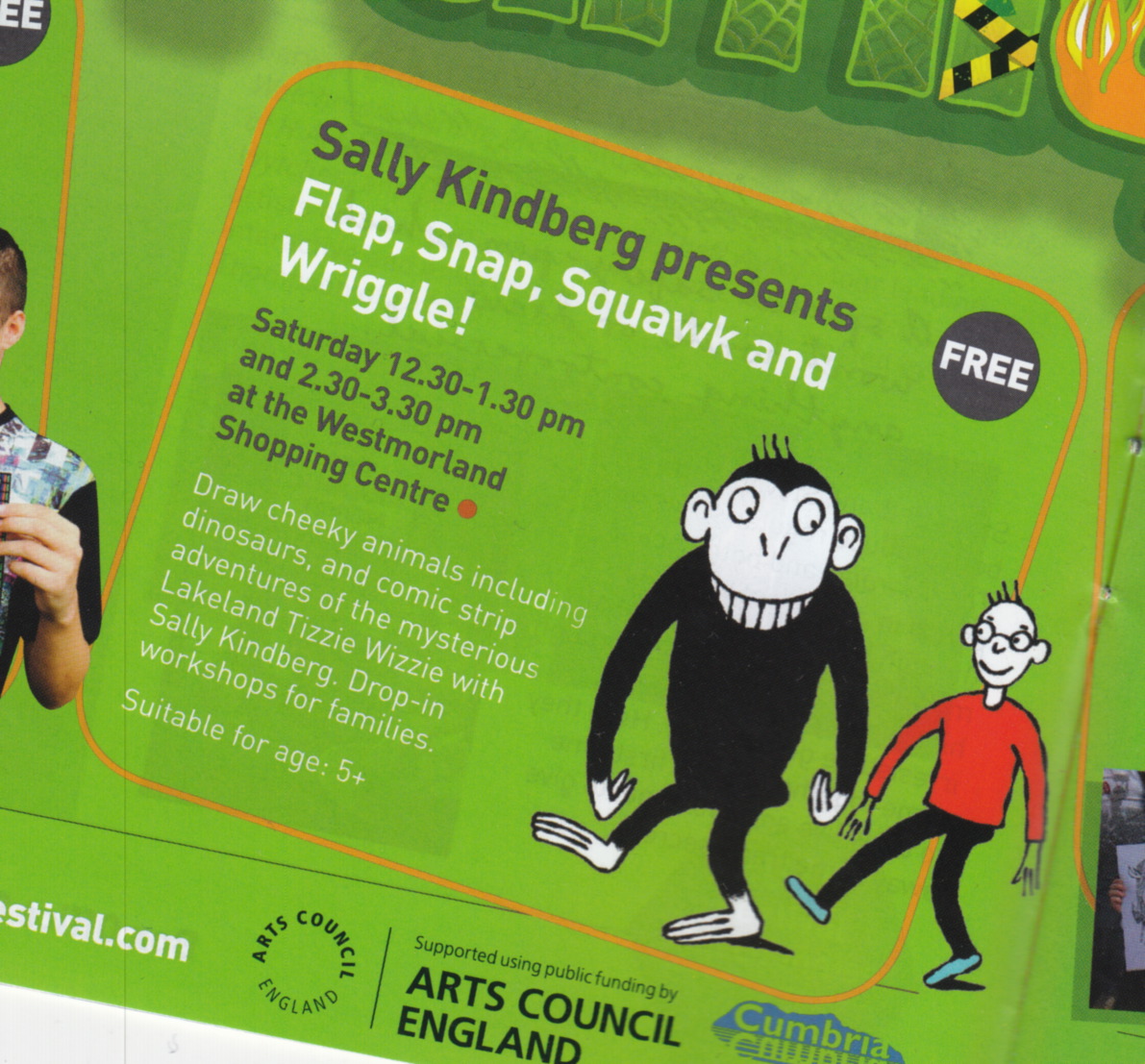 Participants of all ages produced most excellent hatchlings, I signed some Draw It! Dinosaurs books, and we practised appropriate (or inappropriate) dinosaur noises. 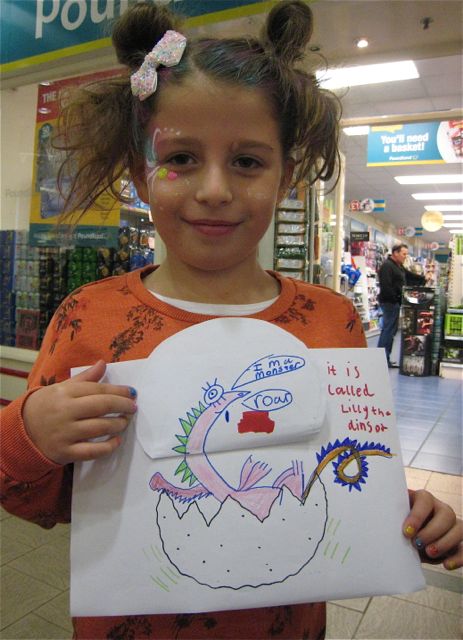 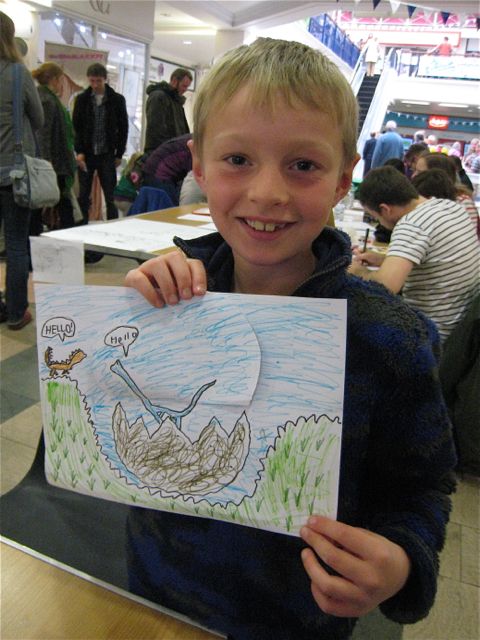 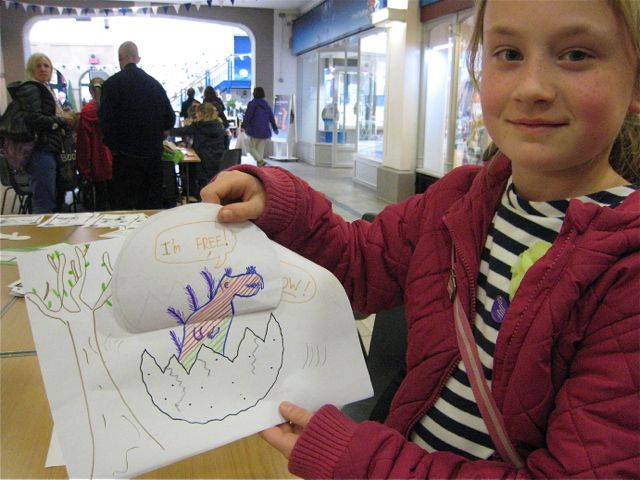 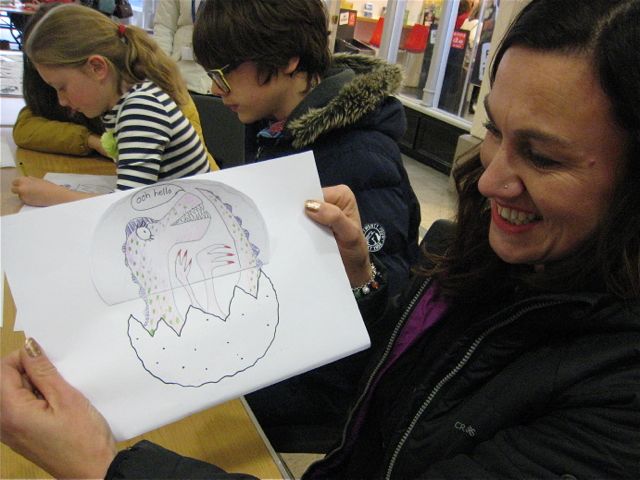 Stayed at this hotel, where superhero staff gave visitors a warm welcome. 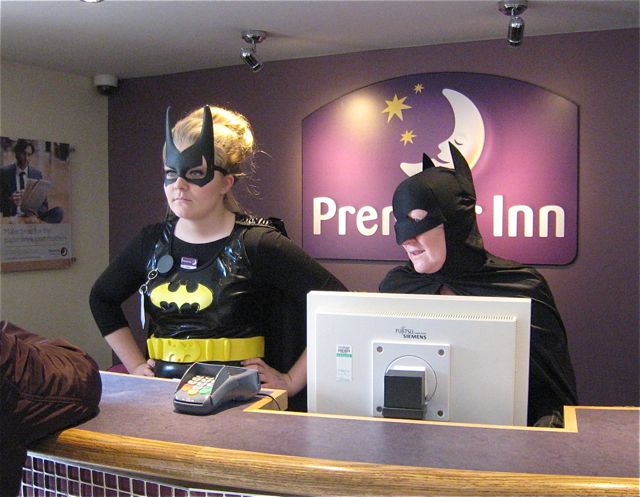 Sarah McIntyre was at the festival, wearing a comic strip frock, with her and Philip Reeve‘s Pugs of the Frozen North, Paul Gravett was in conversation with Benoit Peeters talking about the Leaning Girl, Francois Schuiten and more,  Steven Appleby did a gig with Steve Bell, Dave McKean commented on his film Luna, there was live manga as well as an exhibition about Shojo manga, bento boxes for lunch at the Brewery Arts Centre cafe and monster portraits by Jonathan Edwards who’s got an exhibition in Japan next year.  Mary Talbot introduced her latest work, I managed to see three films over three days – The Martian, Otomo’s Akira and Suffragettes (sob) , as well as visit book stalls, some unexpected drawing (a flea) for Soaring Penguin on sunday morning and an almost-makeover by the fab Harajuku ladies. 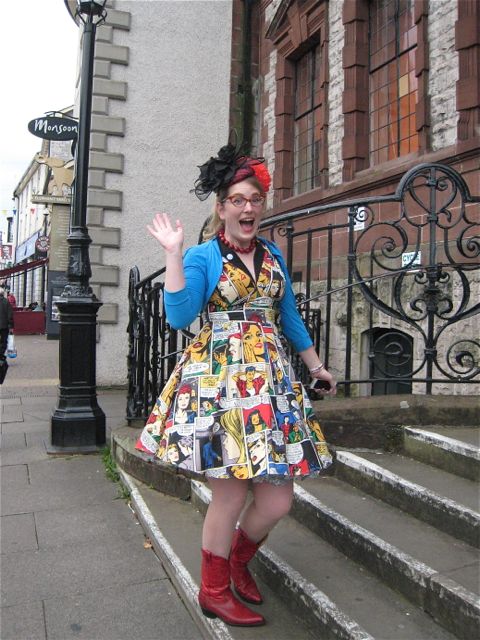 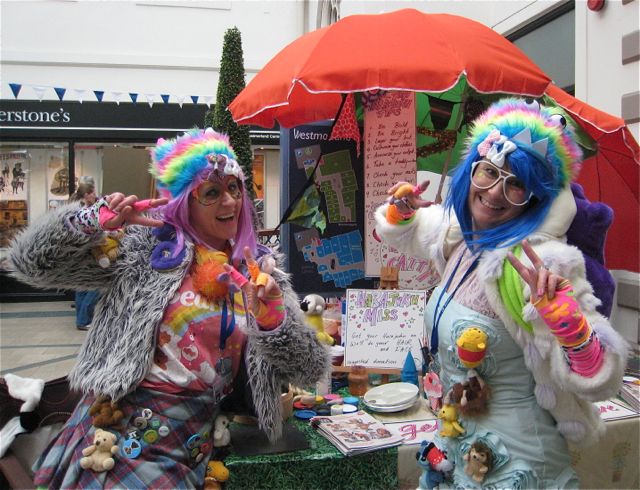 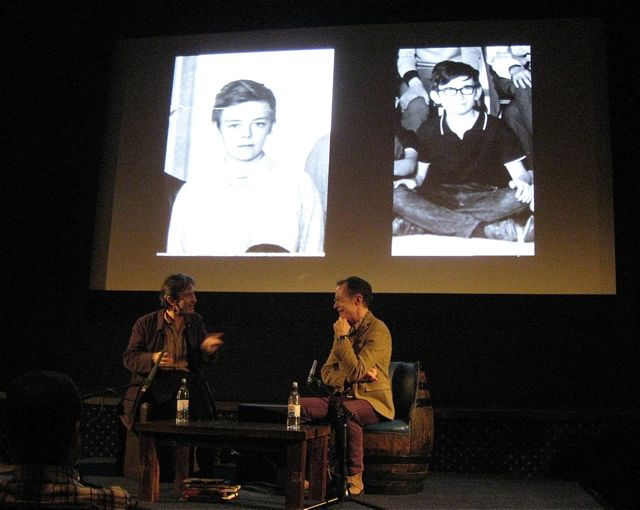 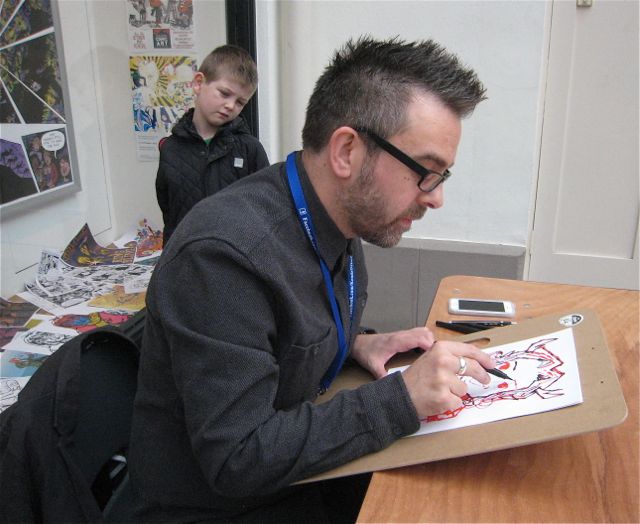 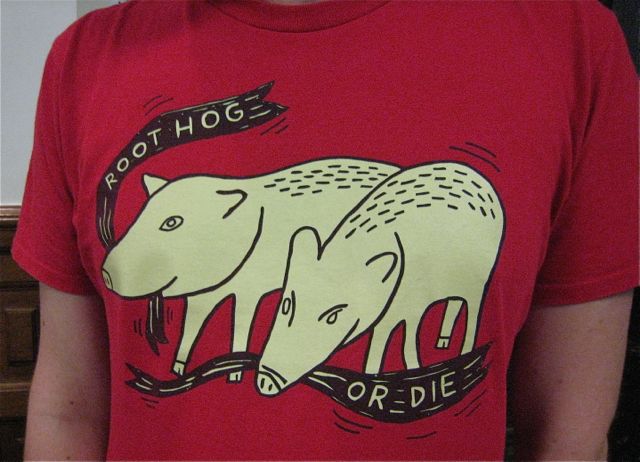 Got chatting with Simon Moreton of Bristol comics wearing a Porcellino T-shirt, and it turned out Simon works next to my little brother Tim at the Watershed in Bristol, gosh, then bumped into Amber Hsu who was there with her mum and wondrous Tiny Pencil boxes …

One afternoon took the brilliant 555 bus to Windermere, to check out the Tizzie Whizzie I’d read about.  Walked down the hill to the lake at Bowness, where I met up with helpful Bob the boatman who showed me a photo of … the elusive Tizzie! 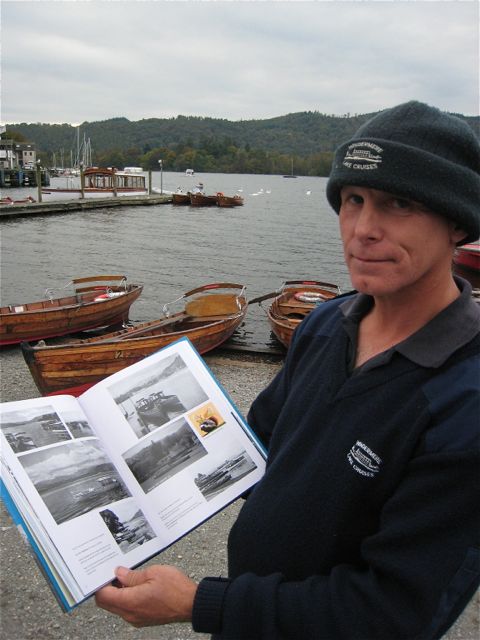 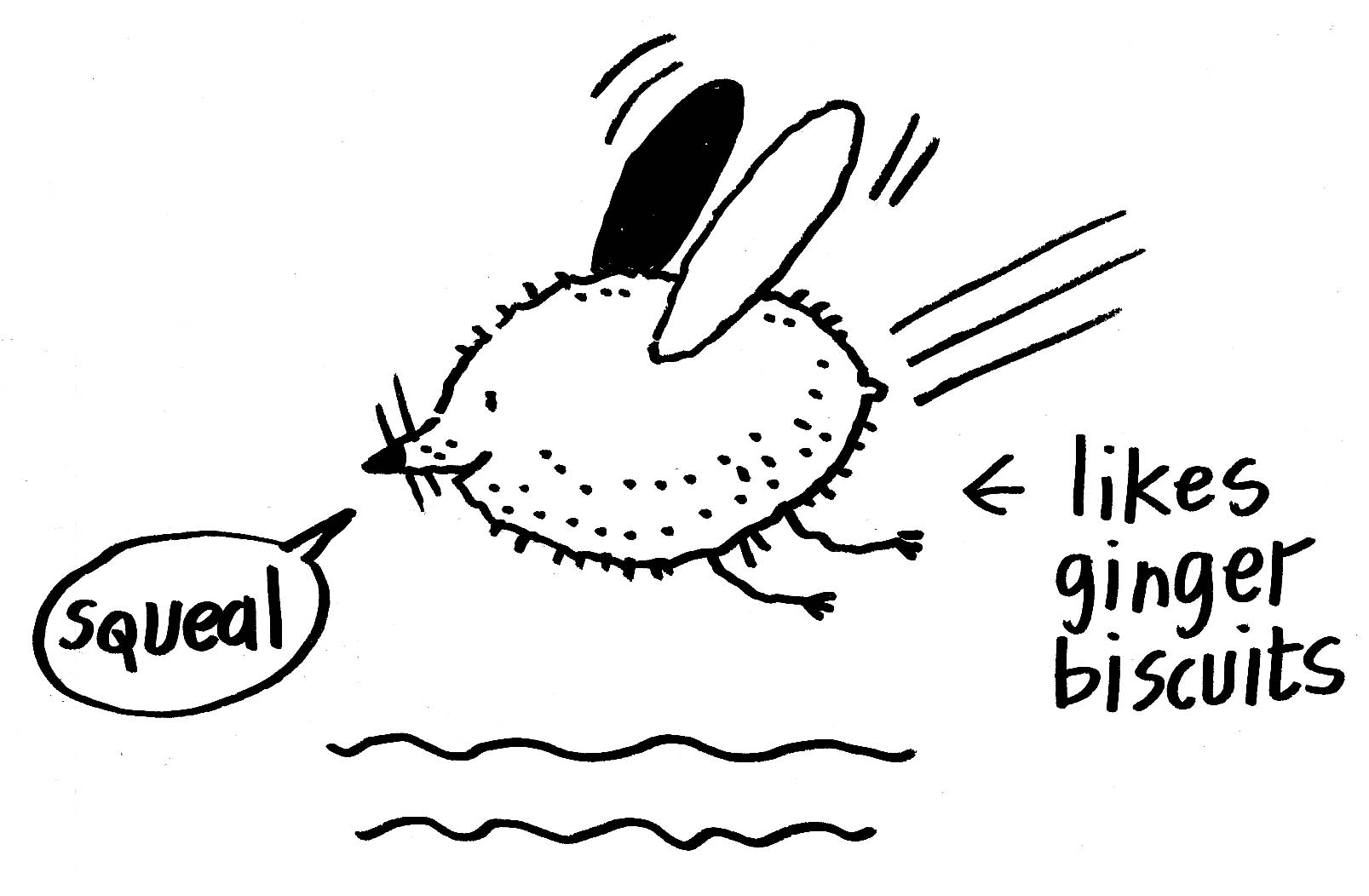