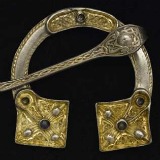 More about my trip to Shetland last November … took a short ferry ride from Lerwick to Bressay and had lunch with Douglas Coutts, who 50 years ago when a boy discovered 8th century treasure on St Ninian’s Isle.  Douglas and I ate his home-made bread with carrot soup, met his hens and chatted about how finding treasure had changed his life. Tall and interested as well as interesting, he seemed a happy man. 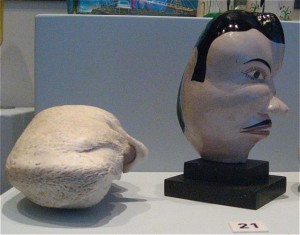 Back to the brilliant Lerwick museum, one side of which resembles a sail.  Most intriguing items.  At sea a long time and getting bored?  What better way to pass the time than … paint a whale’s eardrum.  Several on display, as well as many other wonders including an artist’s reconstruction of a fairy’s cave.

After running an evening workshop at Bonhoga, got a lift to a Pete Stack and the Rayburns gig at Gulberwick Community Centre, making a detour to pick up nine partying lady postal workers who somehow fitted into the car.  Several, squealing,  seemed to have climbed into the boot. Had a dance at the community centre, to the deafening sounds of the Dirty Lemons, the first band on, and managed to avoid one of the postal workers who wanted to pick a fight.  “Why aren’t you drinkin with us?” etc.  Actually I was, slightly, but thinking about the early morning workshop next day, and my interview with Mary Blance for Shetland Radio Shetland Radio Interview (SK)_1-2